Every day I would pick up my camera and shoot.  Everyday I would learn something new.  I quickly got bored of shooting objects and scenery.  People became my favorite subjects.  Unfortunately my kids got tired of being my subjects very fast.

By the end of March I upgraded my Photoshop Elements 2 to Photoshop Elements 8 and put it on Matt’s Macbookpro.  Every night when he got home from school I would grab his computer and learn how to edit pictures in Photoshop.  I mostly learned from online forums and by doing google searches.  I downloaded a bunch of actions* and went nuts with them.

I switched over to RAW files when I started using Matt’s computer.  At this point I was just using Bridge to process them.  It was a lot of trial and error because I didn’t really know what exactly RAW was all about.

The above picture was my first attempt at backlighting.  I would find something specific like that to learn and practice it until I got it.

I took pictures of the kids every chance they would let me.

When they wouldn’t let me I borrowed other people’s kids.  I loved shooting other kids because it really challenged me to try my best.  I would pick these shoots apart and learn from them.  The more photo sessions I did the more hooked on them I got.  I loved it!  It was at this point that I began to start thinking about where this photography thing was going to lead me.  I didn’t have any plans or goals but was beginning to wonder if someday it might become more than just a hobby.

By mid April Matt must have gotten tired of sharing his laptop with me because he surprised me with my very own imac!  It was a little scary though because it meant he thought I could potentially do something with this photography stuff.

I loved editing pictures just as much as I loved taking them early on.  It was fun to learn more and more about Photoshop.  I started learning as much as I could about colors, color castes and the color channels in Photoshop.  I learned how to read histograms.  I learned about clipped pixels and how to prevent them on the skin.

I took notes as I learned.  I memorized the color wheel so I would know how to fix color issues.  As nerdy as it may be I was having so much fun learning something new! 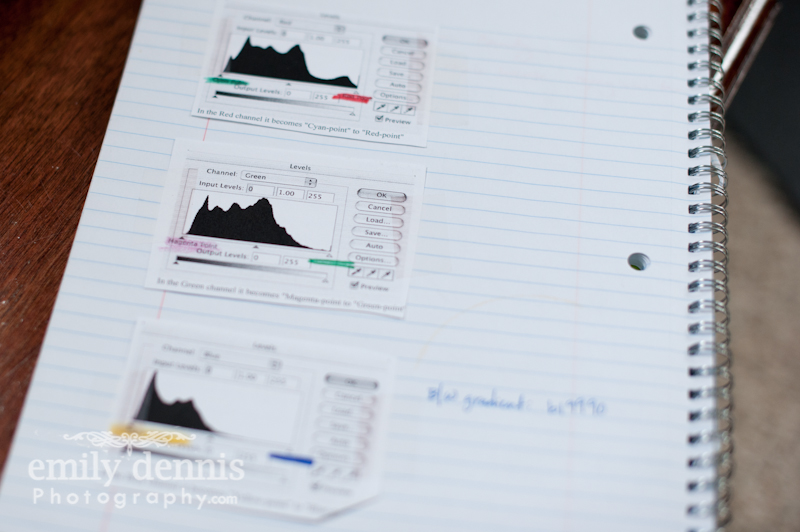 The weather was finally nice enough in May to take Kirsten out for an official shoot.

Also in May, I took my twin sisters out for a shoot.  I would come home from these shoots and analyze everything I did wrong and then research how I could improve.  Editing was a slow process because I was still learning Photoshop and trying so many different things.  I was developing a style and trying to figure out what I liked.  Turns out I like a clean pure edit so editing doesn’t take me nearly as long today as it used to.

In May a friend suggested I take some pictures of her daughter and friends before prom for some practice.  I almost said no because I lacked confidence.  But then I figured I had nothing to lose and even though I couldn’t promise anything would turn out I did the pictures anyways.

The pictures I did for these kids was the turning point.  I was thrilled with how they turned out and this shoot alone gave me the confidence to pursue photography as more than a hobby.

*A favorite site for free actions that I found early on was The Coffeeshop Blog.  I downloaded her perfect portait action and it’s the one and only action I still use today.